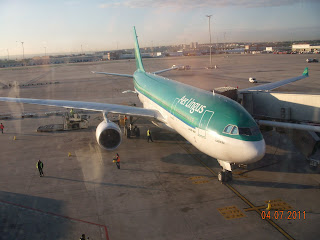 On April 25, 2011, Peter took us to the airport and we flew to Washington, DC, and then to Madrid. Jim got searched very closely at the airport -- apparently a random selection but very time consuming. We arrived in Madrid the next day (April 26) -- took a bus to Soria (a little boy barfed on the bus making for a smelly situation).

We changed buses to get to Pamplona, where we stayed in the Hostel de Nararre. We took a walk after supper to see the bull fighting arena, Heminway's statue, and ofter old stuff. Major jet lag!!!

Each year on July 7, Pamplona celebrates its patron, San Fermin, by running bulls through the streets and holding bullfights. We saw the red gate where these bulls entered the arena.

We began the next day -- hiking the Camino de Santago! 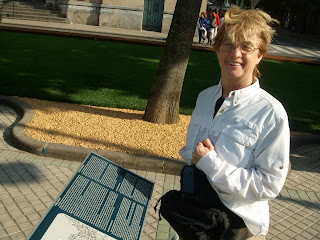 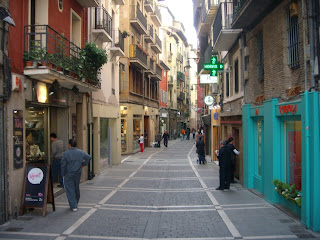 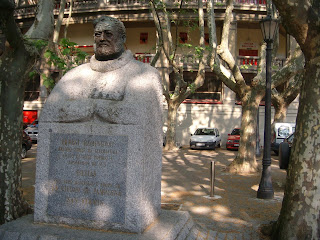 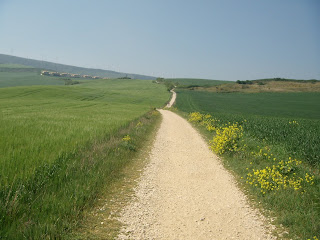 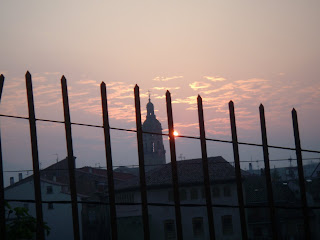 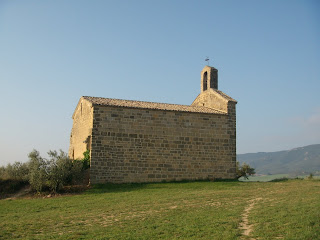 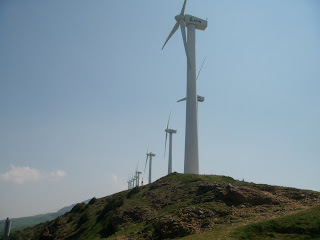 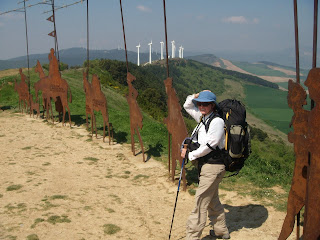 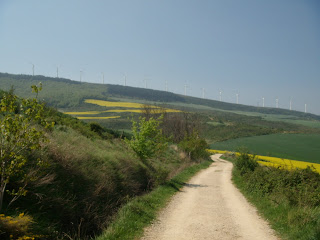 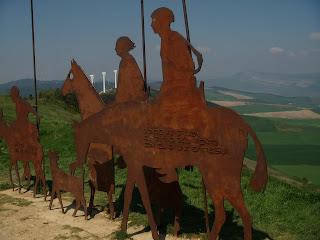 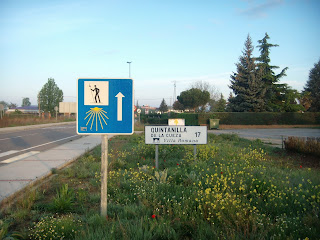 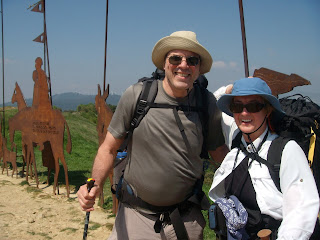 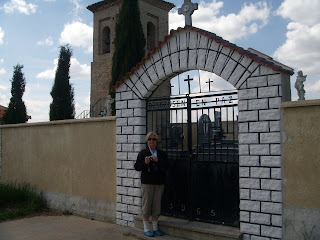 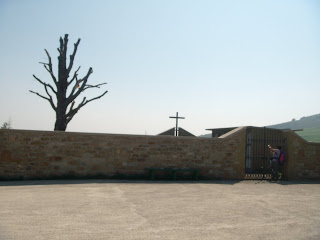 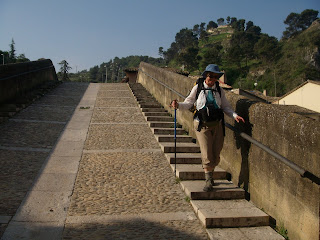 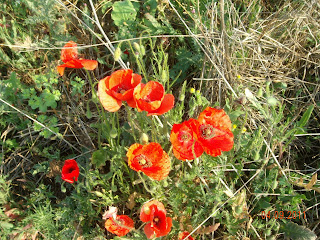 On the flat lands outside of Pamplona, Charlemagne and the Muslim chief Aigoland fought -- the two armies faced each other on the two sides of the Camino in 734; Charlemagne had visions of Santiago and, as a result, fought against the Muslims and defeated them. 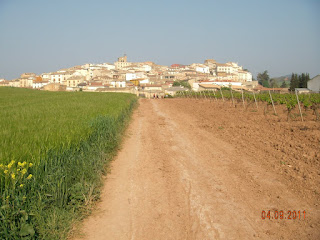 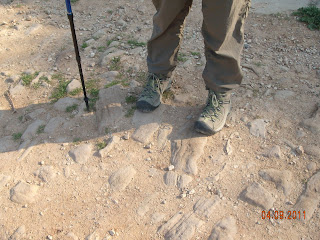 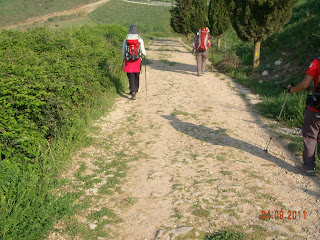 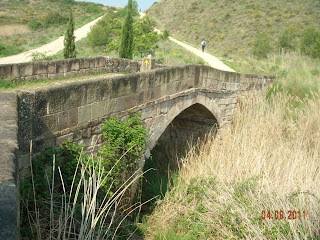 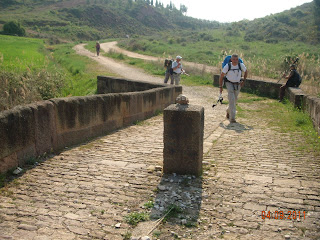 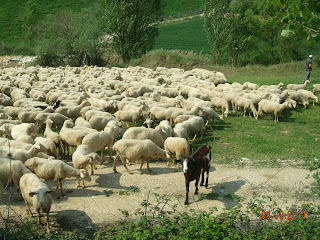 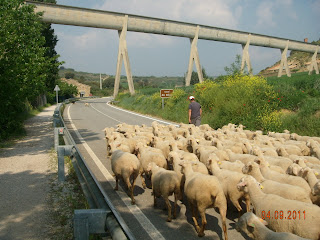 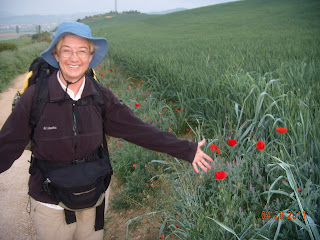 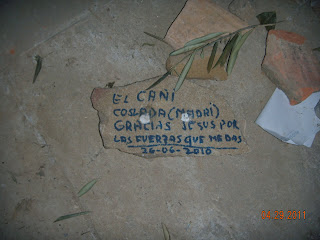 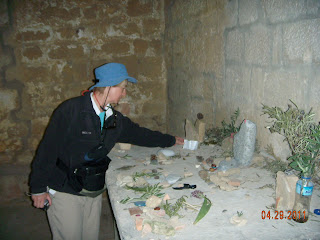 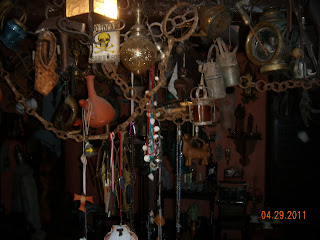 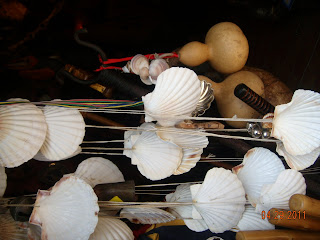 We walked along ancient roman roads -- could see towns off in the distance and trudged on until we eventually came to them.

We walked to Puente La Reina - 21.8 km. It was a beautiful day -- we passed a Japanese man walking very slowing and a hiker who wished us "buen camino" for the first time. Tears came to Karen's eyes.

As the afternoon wore on, Karen walked more and more slowly - her feet hurt with every step. Her toes were jammed into the boots when she walked downhill.

We climbed the Alto de Perdon (Hill of Forgiveness) all morning - passed a long line of widmills on the crest. It was so windy!!! We had our photo taken with the iron pilgrim cutouts at the top.

Then at the end of the day we arrived at the Santiago Apostal Alburgue - We had a private room with bunkbeds but all the noises of the alburgue surrounded us -- it was a 100 bed hostel with many, many people. Karen used her earplugs! There were no English speaking people. We ate with some French women who ignored us. Jim spoke with a Spanish guy. We ate chicken, salad, fried pototoes and had San Miguel beer.

Thursday, April 28 - After a breakfast of bread, juice and coffee, we made our way down the hill. Karen's toes hurt immediately - not good!

Walked 13.5 KM - to Lorea - stayed at the Alburgue La Bodega del Camino, did some laundry - had supper with Danes Lily and Johann and an Australian mom, Rose, and her daughter, Kate. Nice to speak English! supper: Chicken, fried potatoes, ice cream bar. We learn that we will be eating fried potatoes every day!

Our one goal: compete the short walk to Estella, a city big enough to have a shoe store. We've decided that Karen's feet will not improve - she needs bigger shoes.

We left the Aburgue at 6:30 AM - walked to the next town - had some breakfast - Karen wants an egg sandwich -- but that isn't the way it goes here -- they have pan (bread) - fresh loaf, no butter, no jam, but wonderful cafe con leche (coffee with milk). Villatuerta is a lovely town - still sleeping. We walk through.

We stop at a hermitage -right off the path - it is empty except for a alter where many pilgrims have placed rocks and left messages, flowers, notes with prayers.

By 10 AM we were in Estella - saw tourist trinkets - hanging stuff -- we stayed at a guesthouse - Hostal Cristina - that's where we had a great dinner. Paella with mussels and crayfish. Karen had the world's rarest veal chop with red peppers.

In Estella, Karen got her new shoes --we watched the Royal Wedding of Guillermo y Kate with Spanish commentary. Karen kept her feet elevated as much as possible.

We walked down to the square in the evening - the weather was beautiful and people were out strolling with children on scooters, skates, and bikes - babies in prams and strollers - while Spanish music played - glorious!

Saturday April 30.
Karen writes, "I dreamed I was at a bullfight all night but it turned out I was hearing the Friday night party in the plaza below our room - it lasted all night - well into the wee hours. The beautiful clean plaza was trashed but at 6 AM , the noisy street cleaning trucks set out to remedy the problem. All was set right by 7 AM.

We discussed our options - we needed to get out trip back on schedule. Karen's injured toes had put us behind. We walked to the bus station across from the plaza and bought tickets to the next big town - Logrono. Then from there we caught a bus to Burgos. We had the afternoon to see the Catedral de Burgos.

We stayed at the tiny Hostal Garcia - we asked for a double bed but got a really small one! There was only one toilet for 10 rooms!

We walked through a beautiful plaza and the Arch of Santa Maria to reach the Catedral. The Paseo de la Ista is lined with garly trees that make a wonderful arch - and we see the second largest cathedral in Spain -- chapel after chapel gold and ornate carvings and artwork. Altars so hugh that it is hard to see the top. A choir with misericords (now we know what those are). Our photos did not begin to capture what we saw.

In the late afternoon, it was raining - the stores were closed - we went back to our room to get raincoats and set out to find a supermarket (supermercado) and a place to eat. Ham and cheese and mustard for tomorrow's sandwiches. Yoghurt, a big orange for breakfast. We found a bar for egg and potato tortillas -our supper. Sleeping in the small bed was hard - but then we are on the trail again.

Sunday -May 1 - first test of the new shoes. We walk through the city of Burgos - then into the meseta. The sky is overcast - Before long there is thunder - we put on our raingear.

Buefore noon we hear the pealing of church bells - The Rabe de las Calzadas - finally -- a church is open on Sunday!! (most are closed). we duck in to admire the alter as mass is about to begin - Karen starts to weep- she has the makings of a mystic!

We reach the Hornillas de Camino at 2 PM - but it's full!! The owner assigns us two bunks in a room with 12 people with one toilet -- the shower is in another building. We are packed in cheek to jawe - and it is pouring rain - no chance to do laundry tonight! We eat supper with a Slovenia (who speaks English) and a man from Alamaegre (sp) who does not speak German or English. Drinking wine help everyone understand each other. There was a little church next to the Alburgue - we went in after supper to sit. Karen pickup up the handout with the hymns -and saw the Communion hymn "Yo soy el pan de vida" (I am the bread of life...and I will raise him up on the last day). How is that for concidence?

Monday
It was cooller than usual and foggy - walking in the fog gives everything a surreal quality - with other hiking coming up behind without warning - we walked 10 KM and as we reached a cafe, the sun came through. We sat in the sun - drinking our cafe con leches and eating a egg, potato, and cheese thing on big crusty bread.
Posted by Jim at 11:54 PM